If you needed proof that wine is a subjective business, you need only look at that curious activity, blind tasting.

Currently, 180 people around the world are anxiously awaiting the results of exams that depend in part on their skills as a blind wine taster. The Stage 1 and final Master of Wine exams involve assessing and identifying wine in, respectively, 12 and 36 anonymous glasses.

I did the exams in 1984, when things were simpler. The Australian wines really looked Australian (the whites had a distinctive greenish tinge thanks to the habit of starving them of any contact with oxygen). This was also before barrel-fermented Chardonnay tended to taste the same wherever in the world it was made. The range of grape varieties and countries likely to be covered in the Master of Wine exam was also much more limited than it is today. This year’s MW candidates were awarded wines made from, inter alia, Carricante, Torrontés, Albariño, Marsanne, Roussanne and Zinfandel grapes (twice).

The MW examiners are keen to claim that quality assessment and reasoning are just as important, if not more important, than rigorous identification. Still, this will be of little comfort to those who checked this year’s wine list already posted on MW’s website and saw that their guesses – and the blind tasting involved a lot of guesswork – were over be full of reality.

Most of us wine professionals who taste regularly are pretty good at assessing quality, but blind tasting for identification purposes is just like a sport; you have to practice and be in peak condition to do it well.

Today, I hardly need to identify wines blind. Not that I refuse to do that, but people rarely give me blind wines. There was a blessed period when the Bordelais allowed us to taste wine critics and scoop they were blind released, but stopped doing this from the 2016 vintage onwards (perhaps because they didn’t like the results; too many underrated posh wines?). The only few exceptions are about two or three very familiar dinner tables where we all make fools of ourselves far too often. And I get another chance every February when I help judge the Oxbridge wine tasting competition. Here, it seems only fair to log what judges do with the wines before marking the contestants’ papers.

On two recent interesting occasions, I was invited to dinners that attempted to recreate the most famous blind tasting of all, the Judgment of Paris tasting in 1976, when France’s top tasters were asked to put their best wines into compared to some California startups. . They ended up, much to their dismay, saying that American wines were better than wines like Ch Haut-Brion 1970 and Bâtard-Montrachet, a Grand Cru white burgundy.

All the wines in this infamous blind tasting were Chardonnays or Cabernets of some sort, and these have long been the most popular wines in California. So when I sat down to a replay at The Vineyard restaurant near Newbury in April this year, it never occurred to me that the first pair of wines, a clear white, would be anything other than Chardonnay.

We were hosted by someone equally familiar with California wine, Silicon Valley Bank’s in-house wine professional, Greg Gregory, who paid handsomely for lots including this dinner for six in a 2019 auction for Sonoma County Vintners Foundation. As the only wine professionals at the table, Gregory and I took the first two glasses of white and engaged in a very boring discussion about which was the white burgundy and which was the California Chardonnay and gave the other of the table attention to the Ork marina. first course.

The answer was: neither. They were both Rieslings! (If you know anything about wine, you’ll know how different Riesling and Chardonnay are.) Trimbach’s 2009 Cuvée Frédéric Émile and 2016 Château Montelena from Mendocino in northern California made us smile from the glasses. This was the most striking demonstration I have experienced of blind tasting bias. (We were a little more on the ball when we served a pair of Sauvignon Blancs with the trout and horseradish.)

At the end of June, I was involved in another recreation of the Judgment of Paris blind tasting underwritten by another charity auction, this time the Marie Curie London Brain Game. A pair of investment bankers managed to get dinner for 20 in the basement of Noizé, the French restaurant in London now on the old Dabbous site.

Patron Mathieu Germond, who has a fine wine list, volunteered some of his best bottles for the event and, in recognition of the size of the offering, Marie Curie managed to get a few more glamorous bottles.

I was asked to host the tasting and organize the blind part of it. I know how confused people can be between glasses, so I lent Germond some colored plastic clamps to go on one of each pair of glasses rather than the confusion of talking about “the glass on the left /on the right”. Guests were asked to raise their hands which wine they thought was from California. 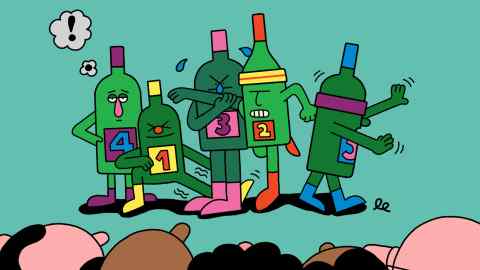 I found it relatively easy to tell the (extremely good) 2017 Kutch Sonoma Coast Chardonnay from the earthier 2017 Rapet Corton-Charlemagne. I also distinguished the rather lovely Littorai, The Haven Pinot Noir 2013, another Sonoma Coast wine, from the lighter Stéphane Magnien, Premier Cru Faconnières 2011 Morey-St-Denis.

The next pair were the two most expensive wines by a good stretch. Mostly Cabernet, both 2008s and both completely irreversible. I was sure that the first growth Bordeaux Ch Latour 2008, a famous slow developer, would be much more tannic and youthful than its California counterpart, Ridge Monte Bello 2008 from high above Silicon Valley. This last one over the years has been my all time favorite California Cabernet. It has remarkable longevity (the 1975 flavor was still going strong in 2018) and as much subtlety as a first growth Bordeaux. As this blind tasting proved when I confused the two wines.

Those competing in a blind tasting look for every possible clue: the shape of the bottle, the remains of the foil around the neck of the bottle, the color of the glass. People will shamelessly seek out any opportunity to get a glimpse behind the scenes. As the late New York wine writer Alex Bespaloff would say, “five seconds of blind tasting experience is worth 10 years”.

My most regular torturer in this respect decants his mystery wines into completely empty, often absurd, irrelevant bottles. And one wine trade host solemnly sat through long arguments between his guests, all experienced blind tasters, about the identity of the second wine he served in a salon before revealing that it was the other half of the magnum we had previously tasted . Nobody got that one either.

As I say, objectivity takes a vacation during any blind tasting.

Wines are listed in the order they were served at Noizé. US prices are given for the first two pairs as it is easier to find the wines there.